“We have always focused on energy efficiency in our processors, but in 2014 we decided to put even greater emphasis on this capability,” said Mark Papermaster, chief technology officer and executive vice president, Technology and Engineering at AMD. “Our engineering team rallied around the challenge and charted a path to reach our stretch goal of 25 times greater energy efficiency by 2020. We were able to far surpass our objective, achieving 31.7 times improvement leading to gaming and ultrathin laptops with unmatched performance, graphics and long battery life. I could not be prouder of our engineering and business teams.”

Energy efficiency for processors is determined by the amount of work performed per unit of energy consumed. To achieve the 25x20 goal, AMD focused improvements on developing a highly integrated and efficient system-on-chip (SoC) architecture; improved, real-time power management features; and silicon-level power optimizations. AMD reduced average compute time for a given task by 80% from 2014 to 2020, while also achieving an 84% reduction in energy use.3 That means an enterprise that upgrades 50,000 AMD laptops from 2014 models to 2020 models would achieve five times more computing performance and reduce associated laptop energy consumption by 84%, which over a three-year service life amounts to saving approximately 1.4 million kilowatt hours of electricity and 971,000 kg of carbon emissions, equal to 16,000 trees grown for 10 years.4

Achieving its 25x20 energy efficiency goal not only delivers a stronger user experience but also further solidifies AMD’s leadership in sustainability. AMD was the first semiconductor company to have its climate protection goals, including 25x20, approved as a “science-based target” by the Science Based Targets initiative  — deemed aggressive enough to help mitigate the impacts of computing on climate change. 5

“Stewardship of our planet can go hand-in-hand with developing powerful technology and helping our customers achieve their aims,” said Susan Moore, corporate vice president for corporate responsibility and international government affairs at AMD. “The power efficiency improvements we have made within our laptop processors make a difference in the world around us. Reporting publicly each year on progress and ultimately achieving, and surpassing, the 25x20 energy efficiency goal reflects AMD’s commitment to sustainable technology.”

“Six years ago, AMD challenged itself to dramatically improve the real-world energy efficiency of its mobile processors,” said Dr. Jonathan Koomey, an industry expert on energy efficient computing. “I have reviewed the data and can report that AMD exceeded the 25x20 goal it set in 2014 through improved design, superior optimization and a laser-like focus on energy efficiency. With a chip 31.7 times more energy efficient than its 2014 predecessor, AMD has far outpaced in real-world efficiency gains what would be expected from a traditional Moore’s Law pace as embodied in Koomey's Law.”

“AMD undertook an audacious and public engineering goal to improve its processor efficiency by 25 times, vastly outpacing historical averages, and in doing so, achieved an industry-leading position in mobile processors,” said Kevin Krewell, principal analyst at TIRIAS Research. “The 25x20 goal required major changes to architecture, design and software, and did not rely solely on silicon process technology advancements. Achieving and surpassing this challenging goal is a testament to the hard work the AMD team put into its products and it catapulted AMD to a leadership position in mobile processors.”

“AMD’s goal of improving the power efficiency of its laptop processors 25 times by this year may have seemed like a bit of an abstract, arbitrary target when they first announced it six years ago,” said Bob O’Donnell, president of TECHnalysis Research. “But as they surpass that impressive goal, it’s becoming significantly more meaningful. Lower energy consumption has never been more important for the planet and the company’s ability to meet its target while also achieving strong processor performance is a great reflection of what a market-leading, engineering-focused company they’ve become.”

About AMD
For 50 years AMD has driven innovation in high-performance computing, graphics and visualization technologies ― the building blocks for gaming, immersive platforms and the data center. Hundreds of millions of consumers, leading Fortune 500 businesses and cutting-edge scientific research facilities around the world rely on AMD technology daily to improve how they live, work and play. AMD employees around the world are focused on building great products that push the boundaries of what is possible. For more information about how AMD is enabling today and inspiring tomorrow, visit the AMD (NASDAQ: AMD) website, blog, Facebook and Twitter pages.

AMD, the AMD Arrow logo, Ryzen and combinations thereof, are trademarks of Advanced Micro Devices, Inc. Other names are for informational purposes only and may be trademarks of their respective owners. 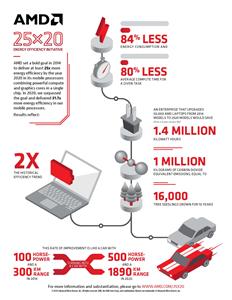 Learn more about the impact of the achievement

This site uses cookies from us and our partners to make your browsing experience more convenient and personal. Cookies store useful information on your computer to help us improve the efficiency and relevance of our site for you. In some cases, they are essential to making the site work properly. By accessing this site, you direct us to use and consent to the use of cookies listed in the cookie policy. For more information, refer to AMD's privacy policy and cookie policy.